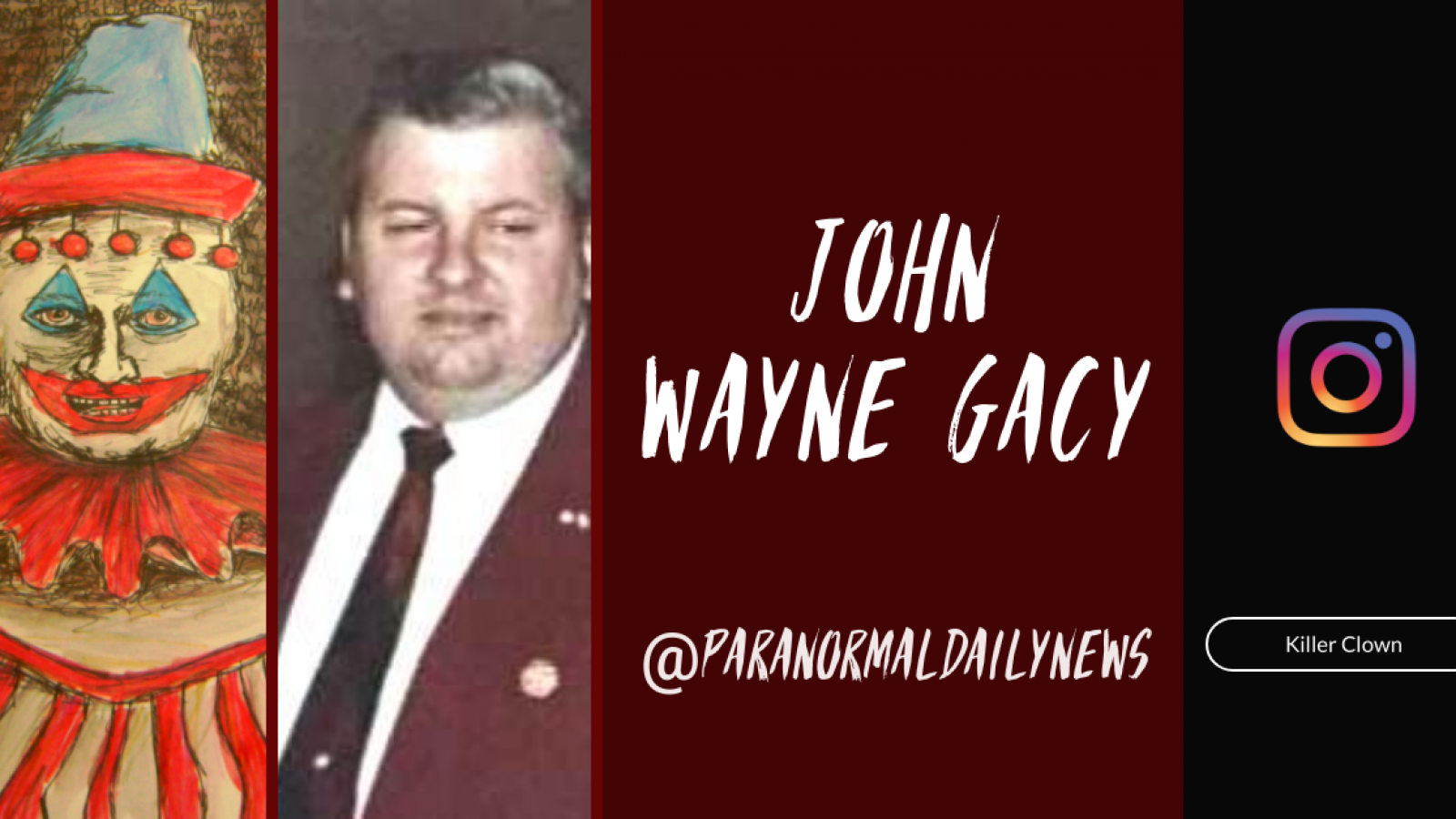 In our serial killer series this week, we take a look at one of America’s most prolific serial killers in history. It is believed that Gacy murdered a minimum of 33 young men and boys while he was an active serial killer. Now, we attempt to delve into his dark mind from a psychological and spiritual perspective.

The larger majority of serial killers experience a bad childhood, and this was most certainly the case for John Wayne Gacy. While he had a good bond with his two sisters and his mother, his relationship with his father was a problematic one.

According to Gacy himself, his father was physically abusive towards his wife and his children. He also claimed that his father was a violent alcoholic. His father would belittle him emotionally as well, calling him dumb and stupid. He would also favor his sisters over him, which undoubtedly had a seriously harmful effect on Gacy’s psyche. Gacy in turn would spend his life trying to obtain his dad’s approval.

The physical abuse Gacy suffered could have led to changing brain chemistry. During an interview in prison, he would recall how his father hit him with a broomstick and rendered him unconscious. Therefore, it would not be unlikely to assume that Gacy’s brain function changed significantly during childhood.

To support this theory further, Gacy suffered blackout seizures during childhood. He was hospitalized numerous times throughout his childhood for these blackouts and was told to avoid all forms of sport. As a result, Gacy eventually got overweight and this drew the ire of his father further. The exact medical condition Gacy suffered from was never diagnosed.

The childhood stories told by Gacy would also be supported by one of his high school friends. His own sisters would also support the stories told by the convicted serial killer. There is no doubt in my mind that his abusive childhood contributed to the person he became. In fact, it may have desensitized him to physical and emotional abuse.

There were some serious red flags surrounding John Wayne Gacy before he became a serial killer. The killer clown did develop an incredibly charismatic personality, which undoubtedly caused him to fly under the radar for as long as he did.

In 1968, Gacy was convicted of sexually assaulting two teenage boys. The seriousness of the offense would lead to a much longer sentence these days, but Gacy only received 10 years. To make matters worse, Gacy was on the streets again only two years later in 1970.

Despite his prison sentence, Gacy’s urges remained. He was arrested again only a year after his release when a teenager accused him of sexual assault. This time, the charges were dropped as the accuser did not turn up in court. In the mid-1970s, two young men would accuse Gacy of rape, which led him to be questioned by the police.

According to Gacy himself, the 1970s were his cruising years, meaning it was the time he committed most of his murders. His release from prison after only two years and the dismissal of the sexual assault is likely to have made Gacy more brazen.

Gacy came under suspicion after the disappearance of Robert Pies in late 1978. Police found out that Gacy had offered him a job just before he disappeared. Once the police started looking at Gacy, they found his previous conviction for sodomy.

Police searched Gacy’s home but found nothing more than some drivers licenses and college rings. Investigators did note upon a strange and unpleasant odor but did not think too much about it. However, Gacy’s luck would not last. One of the rings obtained from the home was linked to another missing boy called John Szyc. The police returned for a more extensive search and discovered 27 dead bodies in the crawl space underneath his house. Robert Piest’s body was eventually found in the Illinois River in April 1979.

Charismatic With A Dark Side

One of the things that stands out most about John Wayne Gacy is his charismatic personality. To most people, he was one of the most upstanding members of the community. He was involved in politics and even performed at children’s birthday parties as a clown.

Gacy managed to create the perfect disguise as a serial killer. Even though he committed numerous rapes and sexual assaults over the years, most people around him were completely oblivious about his past.

One could argue that John Wayne Gacy had the typical serial killer profile, but there is more to him than that. A large portion of Gacy’s pathology is undoubtedly the fact that he was gay. Given his relationship with his father, being gay would not have been accepted. He was also desperate for his dad’s approval, causing him to suppress his sexuality. Gacy would end up marrying a woman, but his victim preference certainly points to the fact that he was a gay man. This undoubtedly left him with a lot of anger.

It is likely that Gacy started murdering to avoid being arrested again for sexual assault or rape. There is also a high chance that he murdered in order to keep up appearances to the outside world, hiding the fact he was gay.

The physical and mental abuse John Wayne Gacy suffered, and the fact he was considerably overweight for much of his childhood and suffered bullying as well undoubtedly had a profound effect on how he developed as an adult.

Gacy eventually admitted to his wife that he was bisexual, although it is believed that he was homosexual. He told his wife that they would never have sex again and started taking teenage boys home. His wife also found gay pornography and ID cards inside the home. Carole Gacy would ask her husband for a divorce in 1975. This proves a very important point, as Gacy started killing in 1972. It is likely that Gacy became more brazen between 1972 and 1975, which made it difficult for him to hide the fact he was gay.

From a paranormal or spirit intervention perspective, I find this unique and fascinating as a case. There are a few potential gateways here and that is reminiscent of the case of Anna Ecklund back in 1928. Her name was actually Emma Schmidt and Anna Ecklund was a pseudonym for her. Now in Anna’s case, it is considered that her aunt was the catalyst for the Demoniacal possession, the reality, of course, is very different. Now as I am not discussing that case, I will refrain from going into that and will ask that you wait as there is a new expose on that case.

Ok, so we can deduce from the case of John Gacy, that he went through a tumultuous childhood and suffered at the hands of his father who abused him so much that he was rendered unconscious at times. Given the fact that his father could have been under the obsessive influence of malevolent intelligence. It would make sense that in the hatred and abuse that actually was levied upon his son, and the act of rendering his son unconscious could have caused the opening of a portal to which the long term obsession could have been affected and begun the pattern of subjugation of Gacy himself.

As my colleague, Sandra pointed out “Gacy suffered blackout seizures during childhood,” which in my opinion can also be a severe sign of spirit intrusion. Now, not all seizures are spirit intrusion, but the evidence and patterns that build and follow from it give support to a pretty good case of potential obsession. Obviously not the type of evidence that would stand up in a court of law. The blackouts and seizures could easily be the affliction imposed by an invading malevolent force. The other interesting issue here is the strange odor, which of course could easily be explained away as rotting bodies, however, strange dead body odors also are a phenomenon of demoniacal possession. We will never really know if this is the case, but one has to consider that odors could have been both and mixed with the reality of the bodies. However, it was also noted the smell that was omitted was not congruent with dead bodies.

The medical professionals who tested Gacy during his trial supported the claim of insanity and noted him to be Schizophrenic, which is also a grey area when it comes to possible spirit intrusion. Consequently, the Jury dismissed this and he was convicted on all 33 counts of murder.

Gacy often went into convulsions and spoke out completely differently. When he gained conscious awareness after the event, he remembered nothing and could not recollect any event. Again this is a good supporting hypothesis of malevolent intrusion.

We will never really know the mind of Gacy, but one has to wonder if, in fact, his heinous evil crimes were a compulsion of evil influences that obsessed him since childhood. This of course is only a hypothesis but it does make one think about the possibilities. Furthermore, it may also make one think about the legal implications of such a hypothesis.

The Orchid Club / CC BY (https://creativecommons.org/licenses/by/2.0)