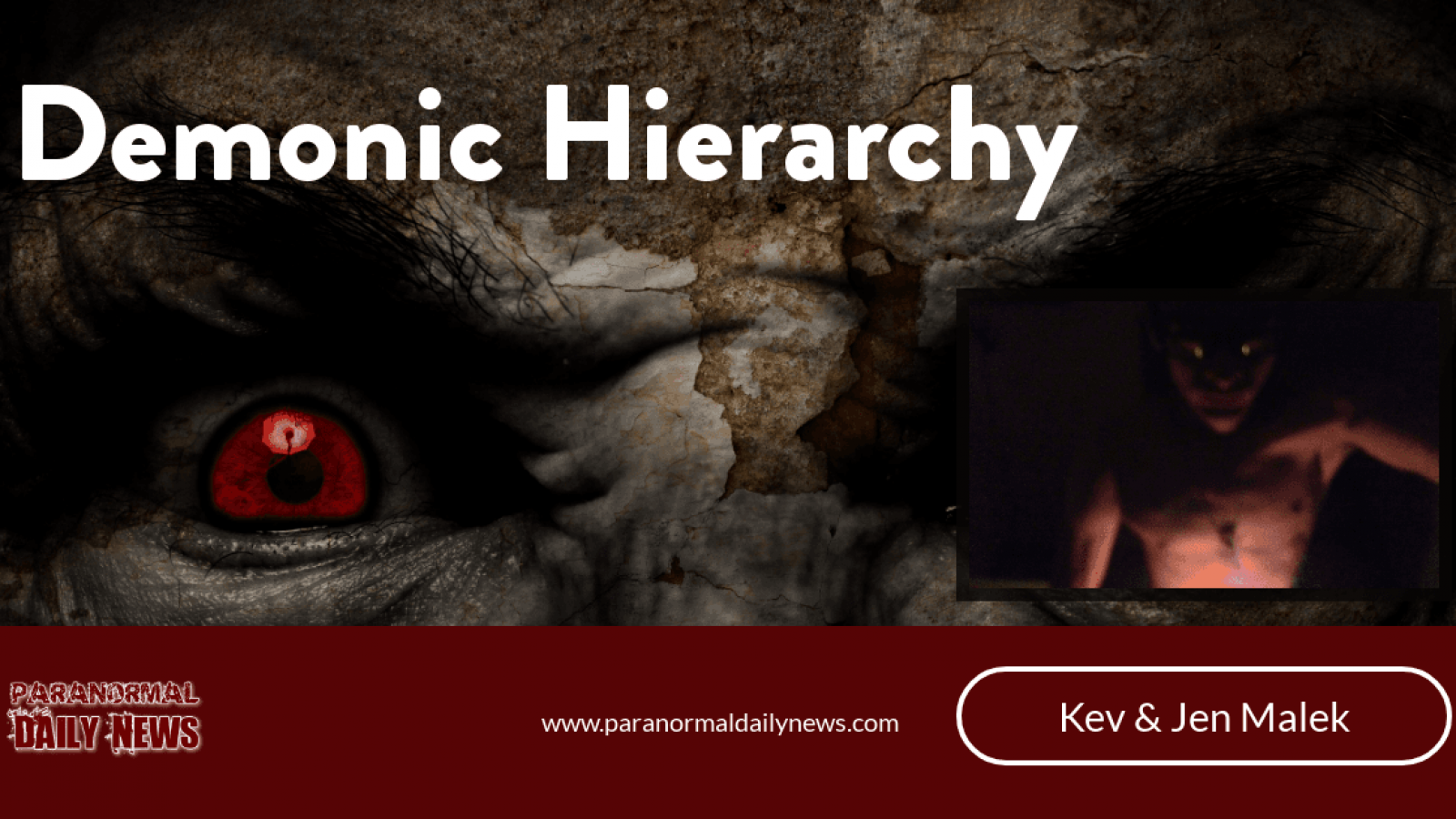 Over the years we have had people express concerns regarding reaching out to God (higher power) out loud directly after being frightened or attacked by a potential diabolical entity because they are afraid they will suffer another immediate attack or anger the entity further if they do. It's a legitimate question. But once one understands how the demonic hierarchy works, along with understanding the primary goals of the demonic, then that question becomes possible to answer effectively. So here are perspectives concerning this.

Diabolical Goals and The Demonic Hierarchy

Remember, demons greatly hate humanity (hate being a strong word). So much so that the created presence of mankind (in God's image no less) triggered a war in the heavens. That was because a third of the angels simply didn't want to serve humanity, as they were expected to do once humanity was created. So after they rebelled, they were cast from heaven. Not only that, but there was also promise of eventual and eternal punishment for those angels (now called demons) who rebelled against God and his plan. That's heavy. That's why they hate humanity so. Thus we are blamed for their demise.

Over time humanity has basically found two primary ways to deal with these beings called demons, which although invisible, still affect our lives. The first way is to appease those demons (in other words, try to make them happy or content). The second way is to oppose them (or to say deny them access into your world). Clearly we recommend the latter (apposition).

Here is why. Appeasing demons invites them into your life, either directly, or indirectly. Whereas opposing them demands that they leave you alone and affect you not. Resisting their presence is thus key. And there is one great way to do that. By connecting to one's higher power, or to say, God.

Which brings us back to the initial question. If someone is going through any kind of negative spiritual oppression, at some point they may reach out to God for help, or attempt to do something which can bring them closer to the divine.

But what can happen is that the person will then experience something, such as paranormal activity (perhaps a manifestation or even a physical attack) directly after connecting with their higher power and thus don't want to experience what scared them again. So they refrain from whatever it was that they feel caused the retaliation, which involved a connection with God. Hence that dark entity has now managed to find a way to achieve one of it's two primary goals or missions.

Before we move along, we need to also examine the principle of hierarchy concerning the demonic. This is relevant and important. Understanding this can help put their situation in perspective concerning interaction and success or failure with their attacks against humanity.

Just like in our human military complex, the demonic has a hierarchy they serve or ranks if you will. The exact positions and labels of which aren't necessarily necessary for one to know to understand how orders and objectives work. As long as one understands that there are different levels or ranks of demons who answer and serve other demons of higher ranking, then this premise will certainly make some sense.

Just as there are different ranks within the demonic, there are also different levels of involvement with the demonic in a victim's life. It starts with an invitation (whether advertently or inadvertently), then progresses to home infestation. After that is oppression and obsession, then finally possession, with the ultimate goal being one's death, and as far from God's connection as possible, so one may not found within The Book Of Life (See the book of Revelations).

It tends to start with lower-level demonic entities who will scout and roam, looking for initiative and invitation to get that permission to enter one's life. People can also accidentally move into an environment where the demonic already have established their infestation. Either way, the plan is the same. And their best weapon is fear. If they can use that fear to keep one away from God's presence in one's life, then the demonic know their odds of success are better overall.

But what if they fail? And what happens in their own world if they do?

Consider this. A demon enters one life. At some point the demon's presence becomes apparent. That, in turn, compels the individual to do something out loud and or with action, which in turn brings them closer to God, be it a prayer, reading a holy book, putting a sermon on, or anything of the like.

But then something negative happens, as in retaliation for the apparent gesture to reach out to the divine, such as scaring the individual with a manifestation or poltergeist activity of some type (parlor tricks as one exorcist put it), or perhaps a physical attack such as being scratched or bruised. This, in turn, scares the heck out of the individual, therefore they may choose to refrain from connecting to God again in such away.

But understand this. Refraining from reaching out to God is technically appeasing to a demon (which is appeasing a demon) because now their goal of keeping you away from God is becoming a reality.

Appeasing demons will keep them around.

But what happens when every time a diabolical entity tries to scare an individual, that person turns to God with all their strength and resolve instead of turning away, regardless of a possible retaliation? Well, then that demon is actually failing because no one is doing the exact opposite as intended.

What's more, they have a hierarchy to answer to. Here is a metaphor. If you went to work and accomplished the opposite of what you were supposed to, do you suppose you might get in trouble? Exactly. If every time a demonic entity tries to bring a person away from their higher power, but one only gets closer to that higher power, then that demon is failing big time and thus will gain trouble instead of success. The higher the rank, the more likely the trouble.

This all means that if one repeatedly reaches out to God (especially in a bigger way) instead of being scared every time something happens, either it's in a demon's best interest to eventually move along to someone else at some point before they catch the wrath of their superiors (because they are failing miserably), or they will get pulled away from their "possession project" by the higher ranking demon so they don't catch strife for their superiors in turn.

This is why it is so very important to wear that armor of God, meaning reaching out to God in a strong way (in this case, every single time fear is caused by the nefarious). Otherwise not only will that oppressing demon remain focused on the individual, but it's also noted that demons will then invite their buddies to the party, so to speak. That is the last thing any victim needs.

So whether one using a rosary, reads their good book, or a dozen other things one can do to plug into God and the greater good, that is much better than retaining the fear of something that ultimately has yet to win. That's the other thing to remember. Demons can't just go around killing people at will. If they could, humanity would be dead and gone by now. God created humanity to exist, despite what any demon may want. They have rules they need to follow as well, the physics that the creator put in place.

Those rules of nature and engagement actually keep us safe in that regard. So just know that one is ultimately stronger in our environment than they are, believe it or not. And when one adds God's protection to that equation, there isn't anything that is not possible, including beating a negative force that encroached upon one's world.

So to answer the question of retaliation, it is our belief that one is better off dealing with the parlor tricks and what not to scare and harass one than eventually becoming possessed because the one tool we have against demonic attack (prayer/spirituality) was eliminated early on. With God's help, one has a chance to beat demonic influence and presence. That is undeniable as there have been countless number cases that have been successfully dealt with which have attributed success to divine intervention. Without God, you are on your own. And these demons have been around a lot longer than any one man.

And although patience pays off, even pious individuals who wear the armor of God have been attacked before (see the book of Job), so no one can guarantee 100 percent safety from dark forces all of the time (every single time) even if they are always refraining from sinning. But wearing that armor of God and practicing his wisdom greatly reduces any trouble and strife one may face from evil forces (see the book of Sirach). Having said that, working on alleviating the fear factor concerning retaliation can be done on one's own or with the right education and help from professionals who deal with these topics.

So don't be afraid to find those who may be able to help deal with fear or PTSD if necessary. There are psychotherapists and psychologists who understand that paranormal and supernatural events can happen and that spirituality is a real and powerful thing.

And remember, most importantly, don't be afraid to pray to your higher power for strength and courage when dealing with the paranormal issues which are causing issue every time they come up. Your odds of successfully prevailing over darkness will greatly increase in the long run. Also, remember that a spiritual and emotional support system helps as well. Those can be one and the same if need be. Peace and blessings.